We have previously discussed how correctness and proper handling of failure cases is why we wrote Effection in the first place. In this chapter we will take a more in-depth look at how Effection handles failures and how you can react to failure conditions.

Every Effection operation runs within a Task, when you call run or use the spawn operation, you create a task. For each yield point, Effecion creates a task for you. Every Task evaluates to one of three possible states, the task can either become completed, meaning it finished normally, or it can become errored meaning the task itself or one of its descendants had an error thrown, or it can become halted, meaning that the evalutation of the task was stopped before it finished.

We have seen that tasks can act like a Promise and that this interface can be used to integrate Effection code into promise based or async/await code:

Tasks can also act like a Future, which can be useful sometimes.

Of course if we throw an error inside of the task, then the task's promise also becomes rejected:

When treating a task as a promise, if the task becomes halted, the promise is rejected with a special halt error:

One of the key principles of structured concurrency is that when a child fails, the parent should fail as well. In Effection, when we spawn a task, that task becomes linked to its parent. When the child task becomes errored, it will also cause its parent to become errored.

This is similar to the intuition you've built up about how synchronous code works: if an error is thrown in a function, that error propagates up the stack and causes the entire stack to fail, until someone catches the error.

One of the innovations of async/await code over plain promises and callbacks, is that you can use regular error handling with try/catch, instead of using special error handling constructs. This makes asynchronous code look and feel more like regular synchronous codes. The same is true in Effection, we can use try/catch to deal with errors.

However, note that something interesting happens when we instead spawn the tickingBomb operation:

You might be surprised that we do not enter the catch handler here! Instead, our entire main task just fails. This is by design! We are only allowed to catch errors thrown by whatever we yield to directly, not by any spawned children or resources running in the background. This makes error handling more predictable, since our catch block will not receive errors from any background task, we're better able to specify which errors we actually want to deal with.

If we do want to catch an error from a spawned task (or from a Resource) then we need to introduce an intermediate task which allows us to bring the error into the foreground. We call this pattern an "error boundary":

We have already seen using the main entry point to run our code when we build our entire application using Effection. One advantage of main over run is that when our operation fails, we exit the program with a proper failure exit code. Additionally main prints a nicely formatted stack trace for us on failure: 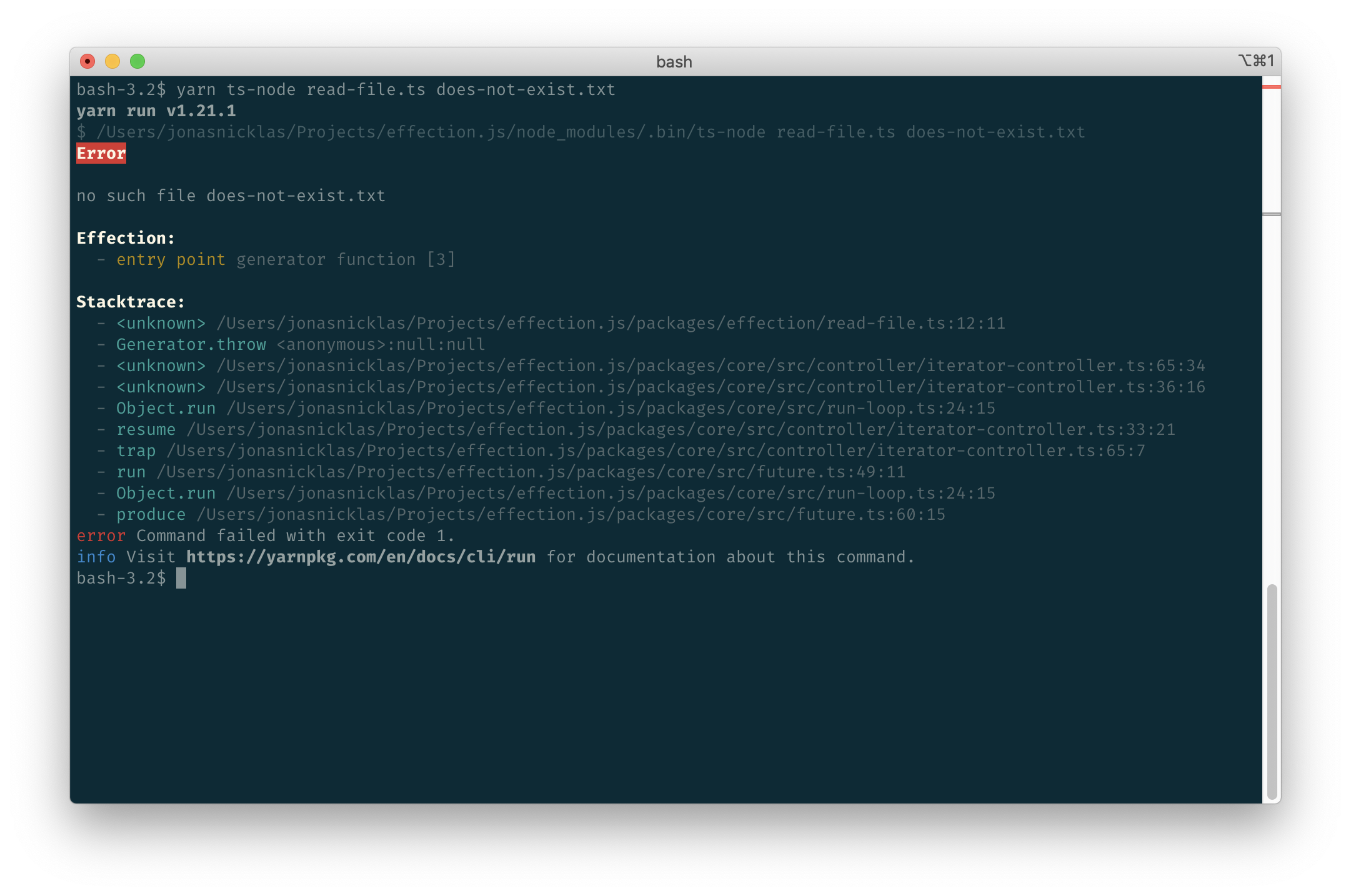 We can see that in addition to the regular stack trace of our program, we also receive an "Effection trace". This gives some context on where the error occurred within the structure of our Effection code. To make this as useful as possible, you can apply Labels to your operations, which will be shown in this trace.

There are cases where we want the program to exit, but it might be due to user error, rather than an internal failure. In this case we might not want to print a stack trace. For example, if we're building a CLI which reads a file, and the file that the user has specified does not exist, then we might want to show a message to the user, but there is no need to show a stack trace. Additonally, we might want to set a specific exit code.

Effection ships with a special error type, MainError, which works together with main for these types of situations:

When using MainError the stack trace will not be printed and the exit code specified in the error will be used. This is what it looks like when we try to read a file which does not exist: 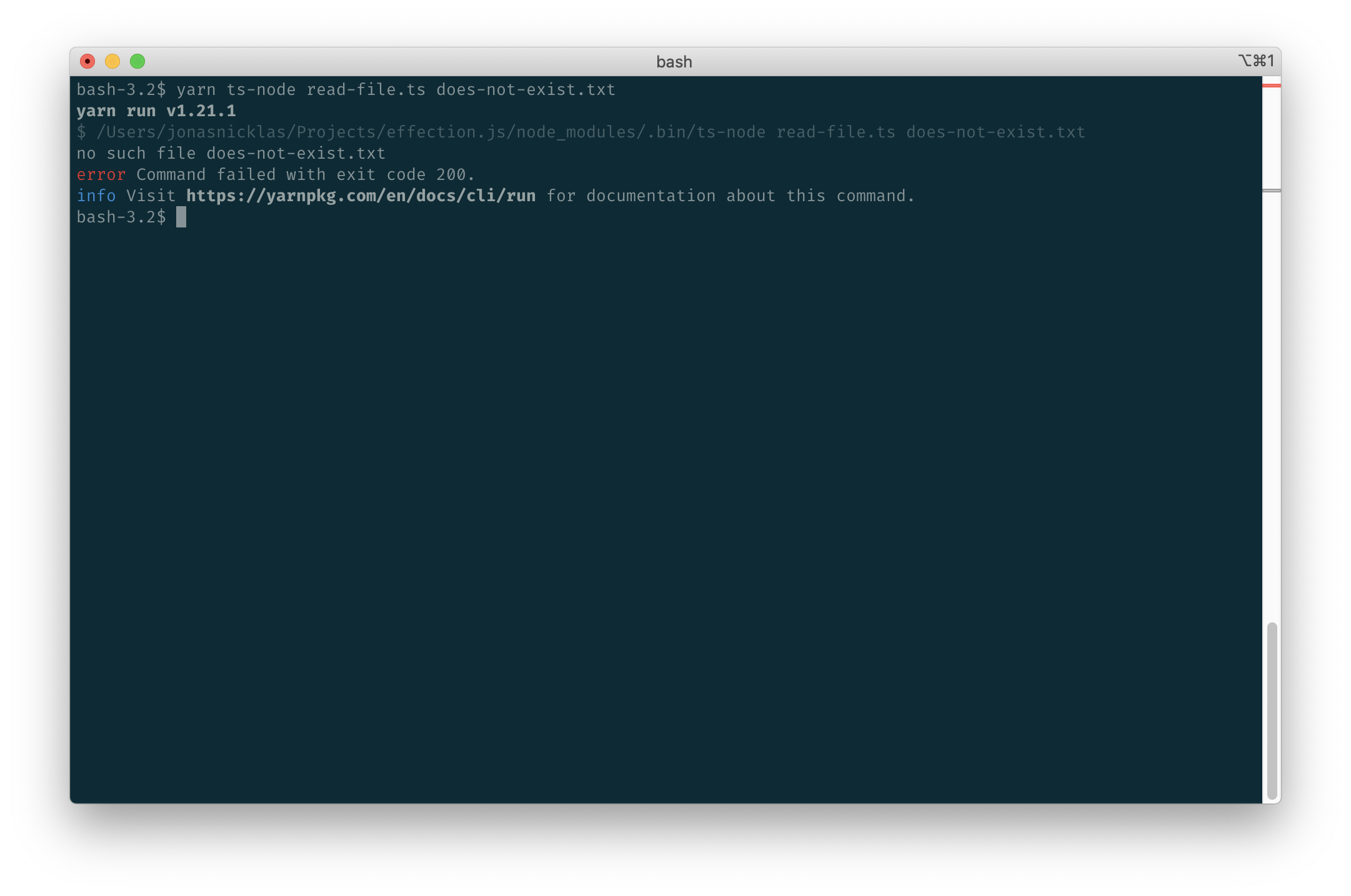